FOSTERING A CALF TO A HIGHLAND COW

In 2005 we purchased our first four Highland cows, two of which were in calf. The first calf was discovered tipped upside down in a Tomo with his head stretched back, but as Mum was placidly grazing at the top of the hill, Doug was able to pick him up and carry him to a place of safety so he could be properly cared for. One lucky success!! We were not so luck with our second calf – a heifer, who died unexpectedly within a few hours.

Being new to Highland cattle, Doug decided the cow would be happy to foster a Friesian cross bull calf, but unfortunately he didn’t ask her, and she was distinctly annoyed at the idea!! We found out some time later that Highland cows will not accept a foster calf. We therefore resigned ourselves to getting the cow and calf into the yards twice a day until weaning. After about eight weeks, we were surprised that the calf had stopped drinking when he was brought in, and the following day we saw him drinking from his foster Mum in the paddock. Success number two, although a success that was hard-won.

Reihanna-Girl’s calving troubles continued the following year, and once again a foster calf was purchased. This time it was a case of love almost at first sight, much to our relief. We had decided to separate cow and calf to encourage more kindly treatment of the calf while the cow became used to him, and so he could become hungry enough to feed strongly. Despite the bad start to calving, from her third calf on, the cow has produced and successfully raised her own calf.

We had considered ourselves fortunate that we had few dead calves, but once again we had a first calver who has lost her first two calves. This year we were given a Highland/Friesian bull calf, and after three feeds the cow fell in love with him. Again, we used the separation method as a way to safe-guard the calf from kicks and from filling up on grass. They are now an inseparable pair, and we can say with confidence that Highland cows WILL foster calves – but in a few cases it may take some patience before it happens. We could probably put the time factor in our first experiment down to our own inexperience rather than the cow.

To update: in the 2016/17 calving year, we had 50 cows calve and needed three foster calves for various reasons. Most years we have no deaths, however when we need to, we use the same method to mother on and it has worked very successfully. 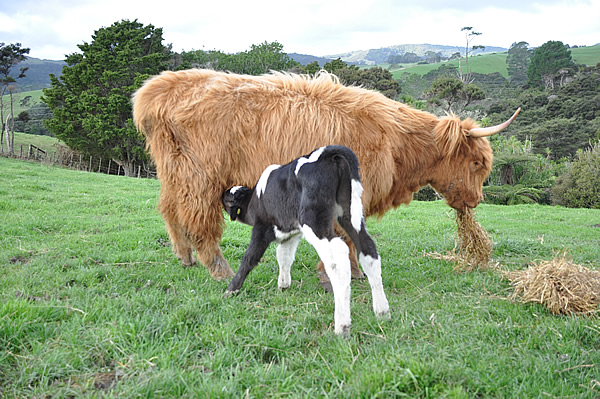 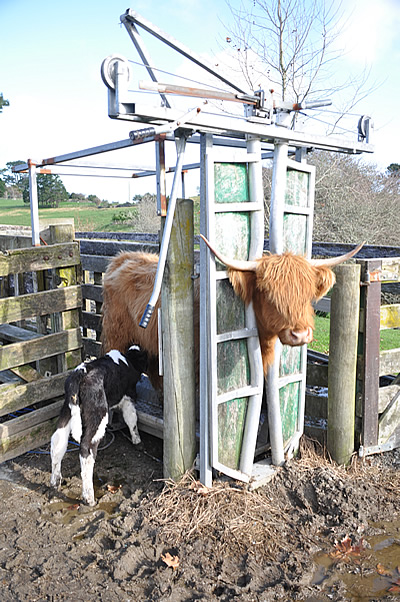